One of the exciting parts of moving into our studio has been designing our space. Producing signage has definitely been an excellent use of our multi-disciplinary skills, all the fun tools (I mean, we have to use our 3D printer for something practical) and satisfies our insatiable need to make stuff. We did our best to capture the process of developing our outside signage, so let’s walk through some of the highlights!

The design our logo lends itself easily to being turned into a display. However when it comes to execution, there were definitely a few challenges to overcome. With our interior sign, we had to make some compromises and use only a partial cut-away of the hat so it could be mounted on the wall. The trick here was to provide enough clearance for the motor driven propeller to spin, while not having a huge hat sticking out, well into our entry way. Fortunately, this became a non-issue with our exterior sign, but encountered a new set of challenges figuring out to print a full-size hat on our smaller 3D printer, would then need to be re-assembled, support a wind-powered prop, and stand perched up the top of the sign.

First we determined what the overall shape of the sign would be. We wanted to encapsulate the logo-type into a simple form, and would also keep the hat close enough to it, but have some character and personality. Our brand is inspired by the retro (sci-fi) look of the 1950’s / 60’s – so a rounded badge shape seamed to be capture that well.

We took this file and created a 3D mesh out of it, brought it into Cinema 4D and adjusted the scale to real world proportions. We imagined that the two outer pieces would be milled in steel, with a very thin piece of steel on the interior. The letters would probably be cut out of aluminum, which we would later polish.

Big fan of putting things into the real world context before we start committing to this design. A couple of measurements off the existing wrought-iron frame outside, and we placed some virtual chain links into the scene. A little photoshop work and the result is the composite rendering you see below. 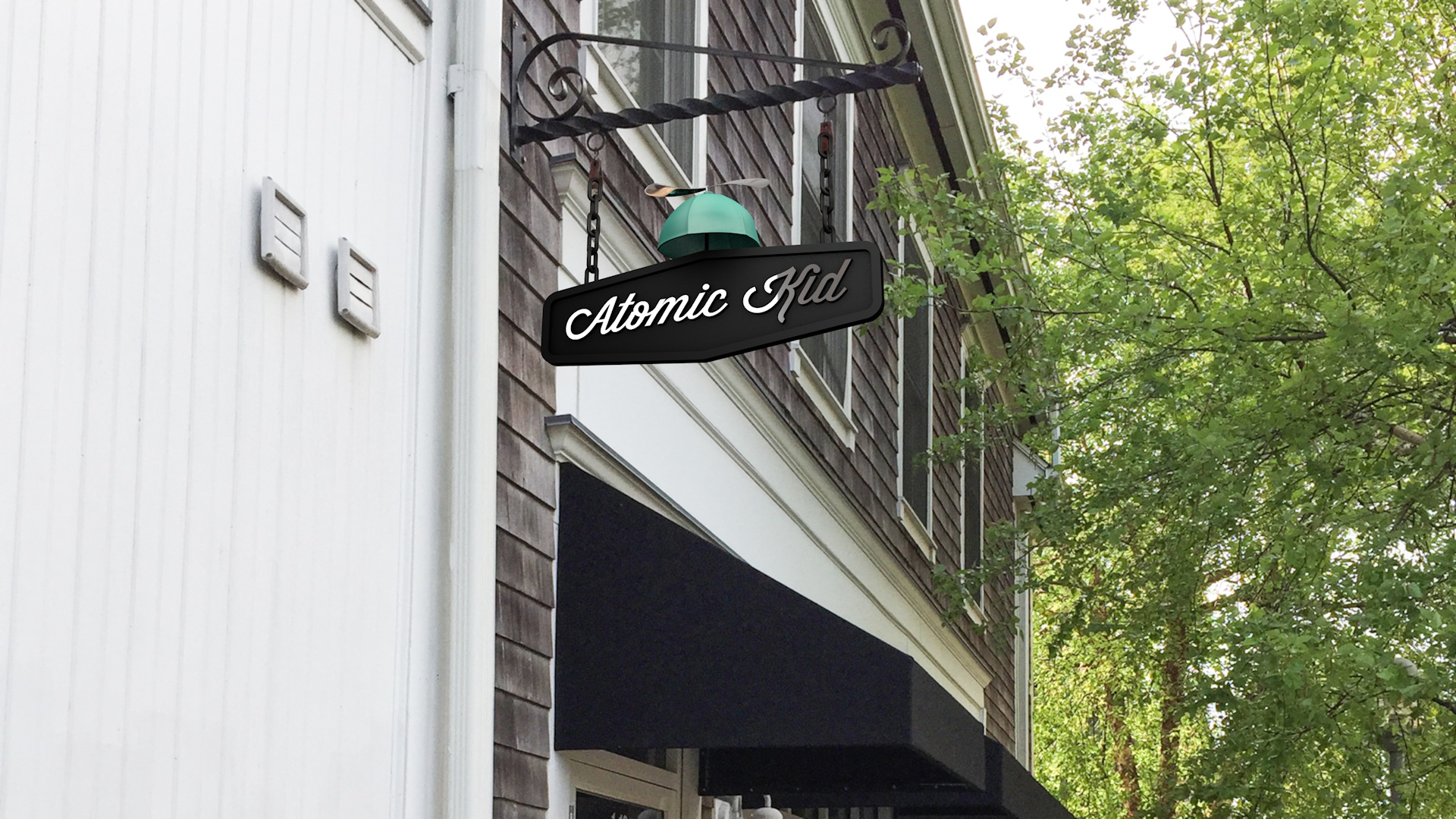 Sold! It looked great, and if we could get it close to that we’d be pretty psyched. Okay, so now we just have to find someone to cut out the metal pieces on a water-jet and figure out how to 3D print the hat large enough.

We were lucky to be referred to an excellent Milford based, family owned aerospace company who was willing to take on this side project. Shout out to Tom Jr. at Newhart for fully embracing our project and doing a fantastic job cutting up all the parts. We now also can claim to have the most precise sign in downtown Milford, because it was milled on machinery made to keep military aircraft – in the air. We expect ours will stay in the air too… 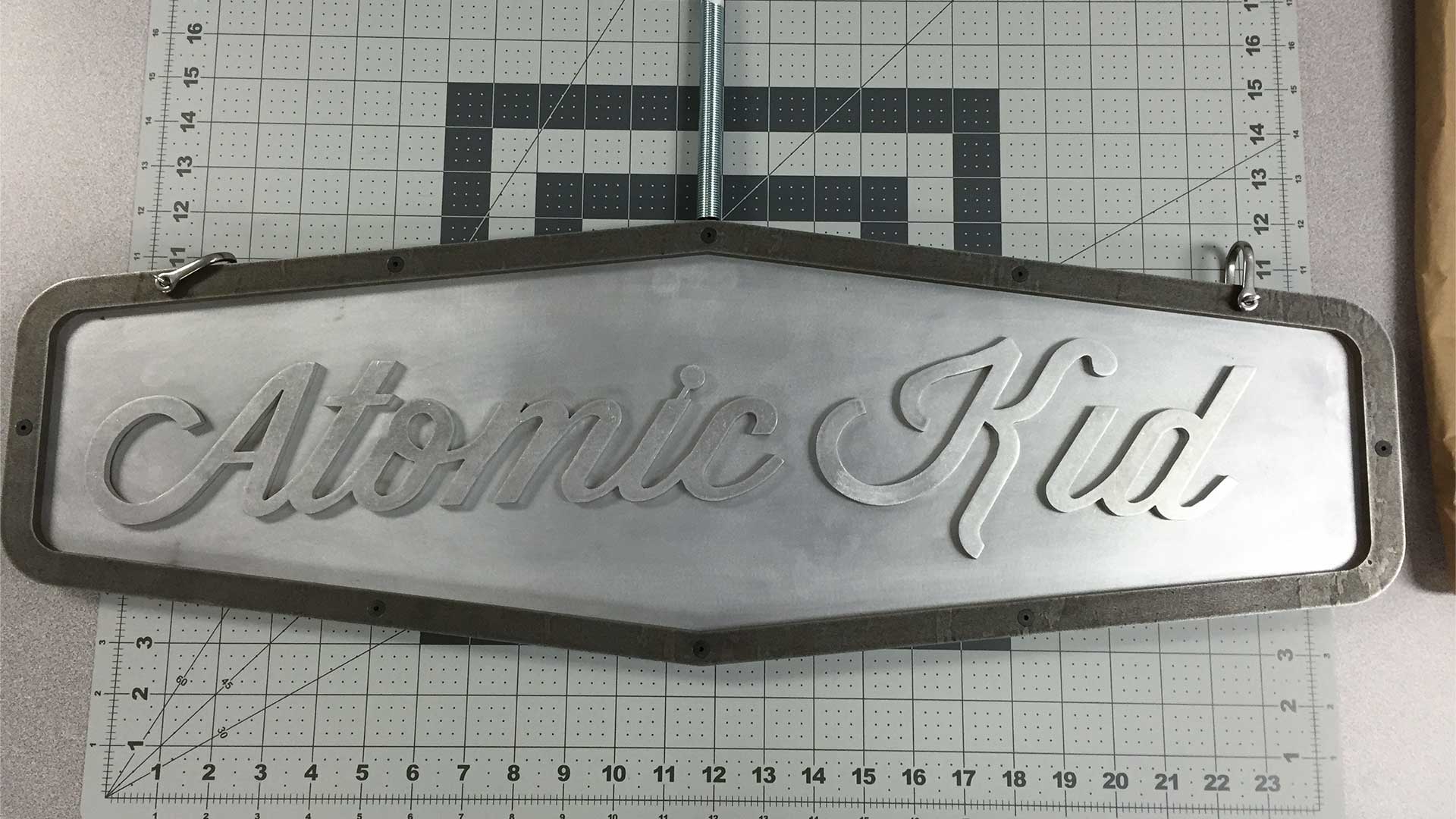 It turned out that using steel for the main background of the sign was a bad idea from a weight standpoint. Weighing as much as the frames itself, we made a last minute shift to aluminum for the middle which dropped 8lbs off our 16lb sign. Newhart precisely tapped and counter sunk machine screws into the appropriate locations and pre-drilled mounting points for the chain. After some wasted hours pacing up and down the aisles of our local hardware store, we found ourselves buying marine grade stainless-steel D-couplers to attached the sign to the chain. Rated at 4000lbs, we’re confident they will outlast the weight of our sign.

We also made the clever decision to use a spring to mount the hat. This provided several advantages. First, the end of the spring has a centered loop which we could pinch between the two plates and hold firmly by the outer frame. The spring provided a bit of “bobble head” like shock absorption, and lastly when cut, a center channel to push our hat onto.

The 3D model already existed for the hat used on our interior sign. The challenge was getting the full-size version of it to print on our 3D printer which has a rather small bed. This of course meant breaking it into 2 pieces and reassembling. Fortunately years of putting IKEA furniture together has lead to some basic industrial design solutions. Nothing ground breaking here, but a few well placed tabs and some measurements of our spring satisfied our needs. A couple of guide holes would later contain a few pins to keep everything straight while we tight the screws.

We also wanted to leave a channel for our propeller. We purchased some perfectly sized aluminum standoffs from the hardware store. The model airplane propeller would be screwed to the post, and then a brass collar would be tightened to the opposite end of the post. When sandwiched between the two halves of the hat, would keep the prop free to spin, but unlikely to actually take off. The longevity of this solution remains to be seen, but so far so good!

I’ve learned the hard way to not treat our 3D printer like Ron Popeil’s Magic Rotisserie, “Setting and forgetting it”, is pretty much the worst thing you can do and expect your print to come out fine. We had a limited supply of the filament we would ultimately use, so I ran some tests in some less useful colors to see how well the sides aligned. This is a very iterative process. 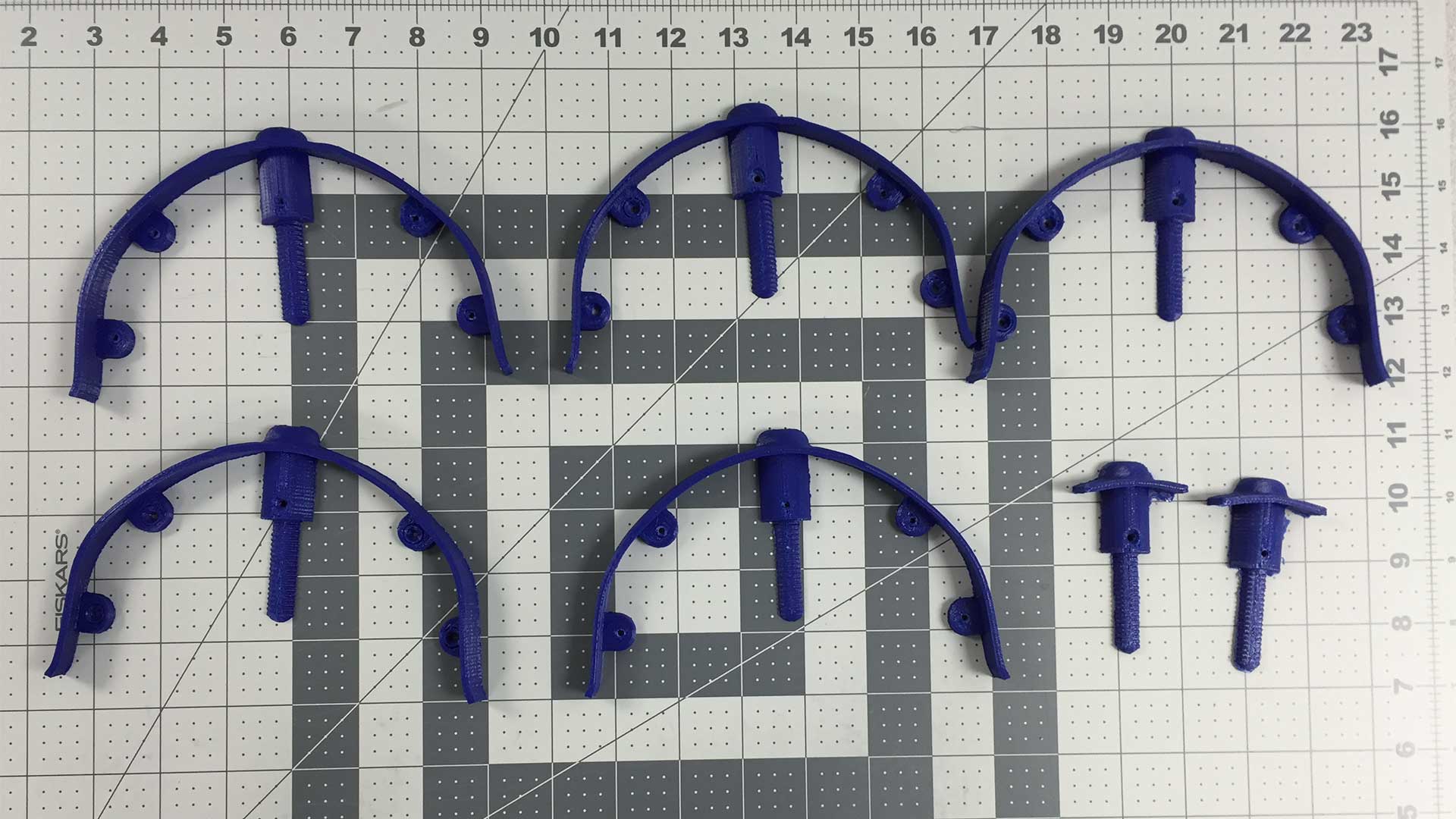 A few tests down, and we finally had a viable candidate! Swapping out the filament for a 3mm Turquoise PLA material, began the very long (and stressful, please don’t F*** up at 90% completed) printing of each side. 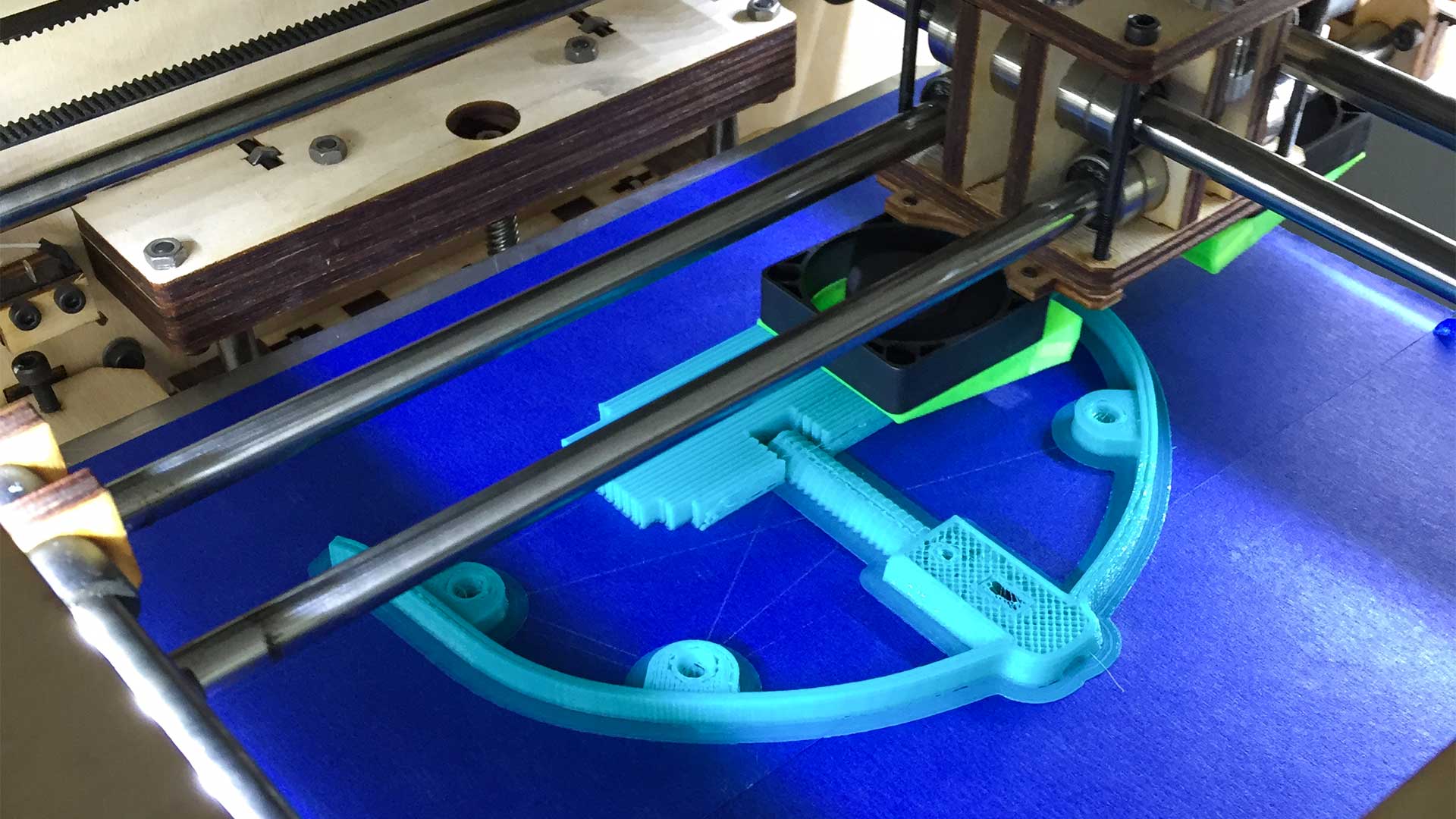 Vigilantly watching our printer rip through 17+hrs of printing resulted in the finished and assembled hat you see below!!

We used stainless steel wood screws, which work fantastically in 3D printed material. We are located in the harbor area and expect a modest amount of salty (corrosive) air to hit our sign. A quick silver painting of our model airplane prop to give it a nice reflective finish. The black wire tubing both protects the spring as well as dressing up the design. It turns out also that we need to dampen the “bobbling” effect.

Polishing aluminum isn’t that bad with power tools. However the angles and relatively sharp edges were likely to destroy all the nice foam polishing gear I would have used. So, it was several hours of tedious manual sanding and polishing with emory boards (black nail files) of various gris. Starting with 600 moving up to 1500. Then some aluminum mag wheel polish did the trick. 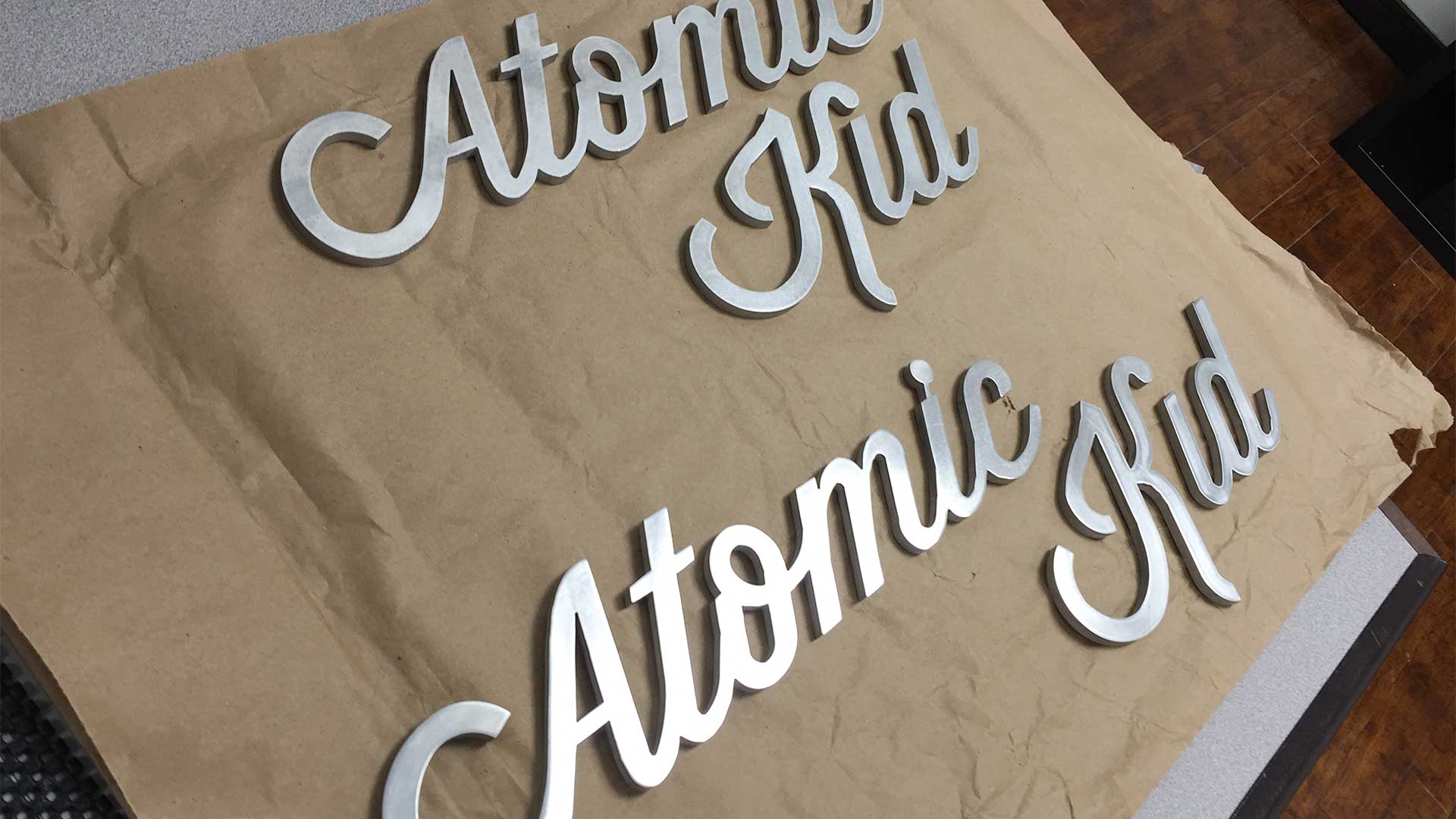 We painted the main body of the sign, but the steel frame looked fantastically industrial and cool. We cleaned up some surface oxidation and then coated the outside frame with a satin clear coat. I highly recommend Rustoleum Satin Enamel Spray.

The next step was trying to perfectly align the letters onto the sign in a way that would match the original design. I quickly discarded some initial ideas I had as to how this could be accomplished. We were also going to be epoxying these letters to the sign and there was absolutely NO room to slide these around.

And then I remembered (and oddly enough one quickly forgets) we can 3D print guides to make this a breeze! We mocked up some simple shapes, positioned in key spots to allow us to tilt the letters in and in the perfect spot. The outer frame of the sign made this possible. So we based our designs on that, and built several 3D models which we would print in some other scrap filament.

We taped the guides into position, mixed our really horrible epoxy, and rushed through 5 minutes of settings time to place each of the 3 text pieces exactly where they needed to go. Wait an hour and do the other side. 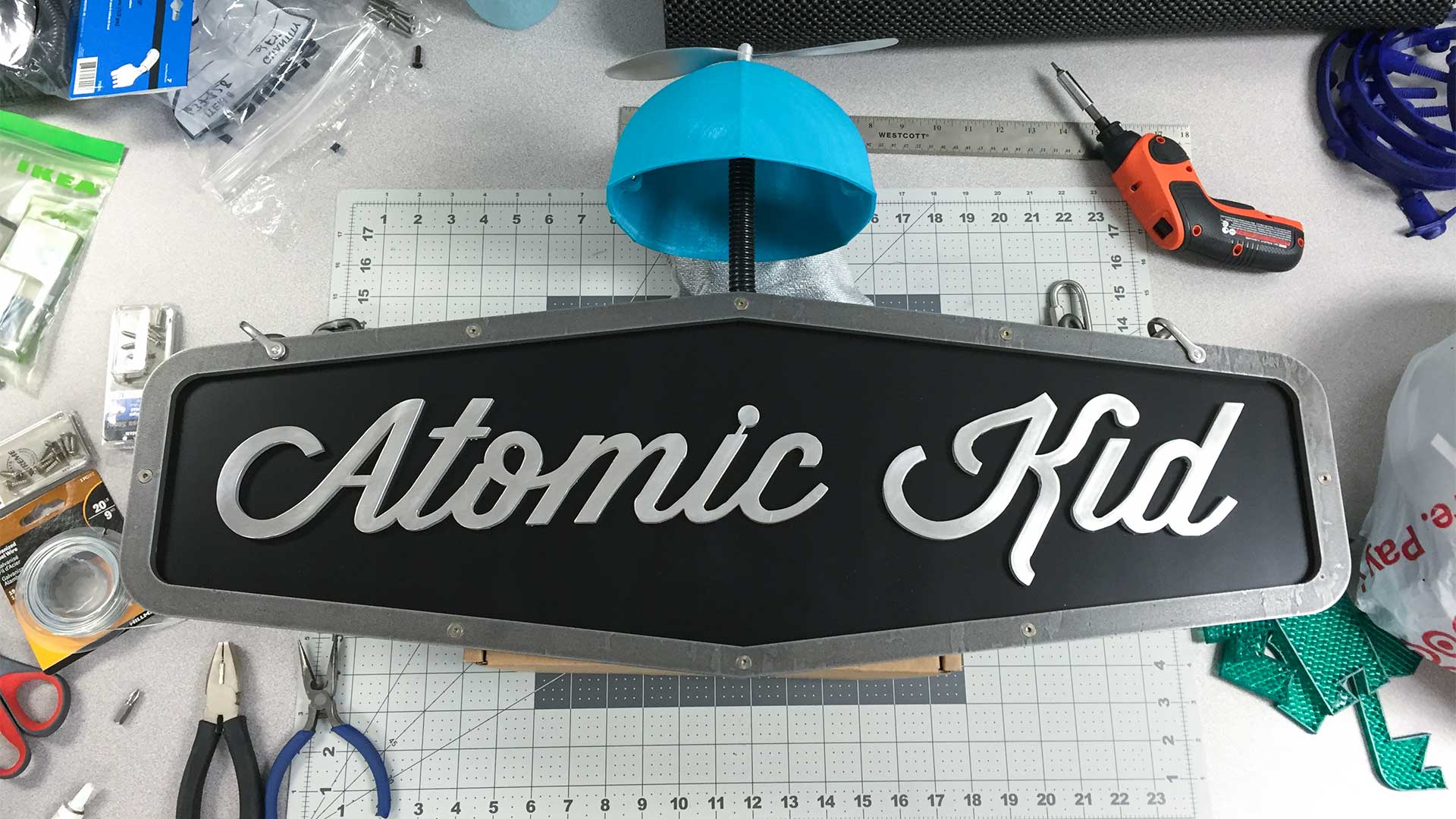 We got the sign hung up when we realized we completely cut our spring too long. Fortunately, you can always remove more material. A quick fix and the hat was in the proper position. Thank you Dremel! We purchased two short lengths of chain and hoisted the sign up into position. 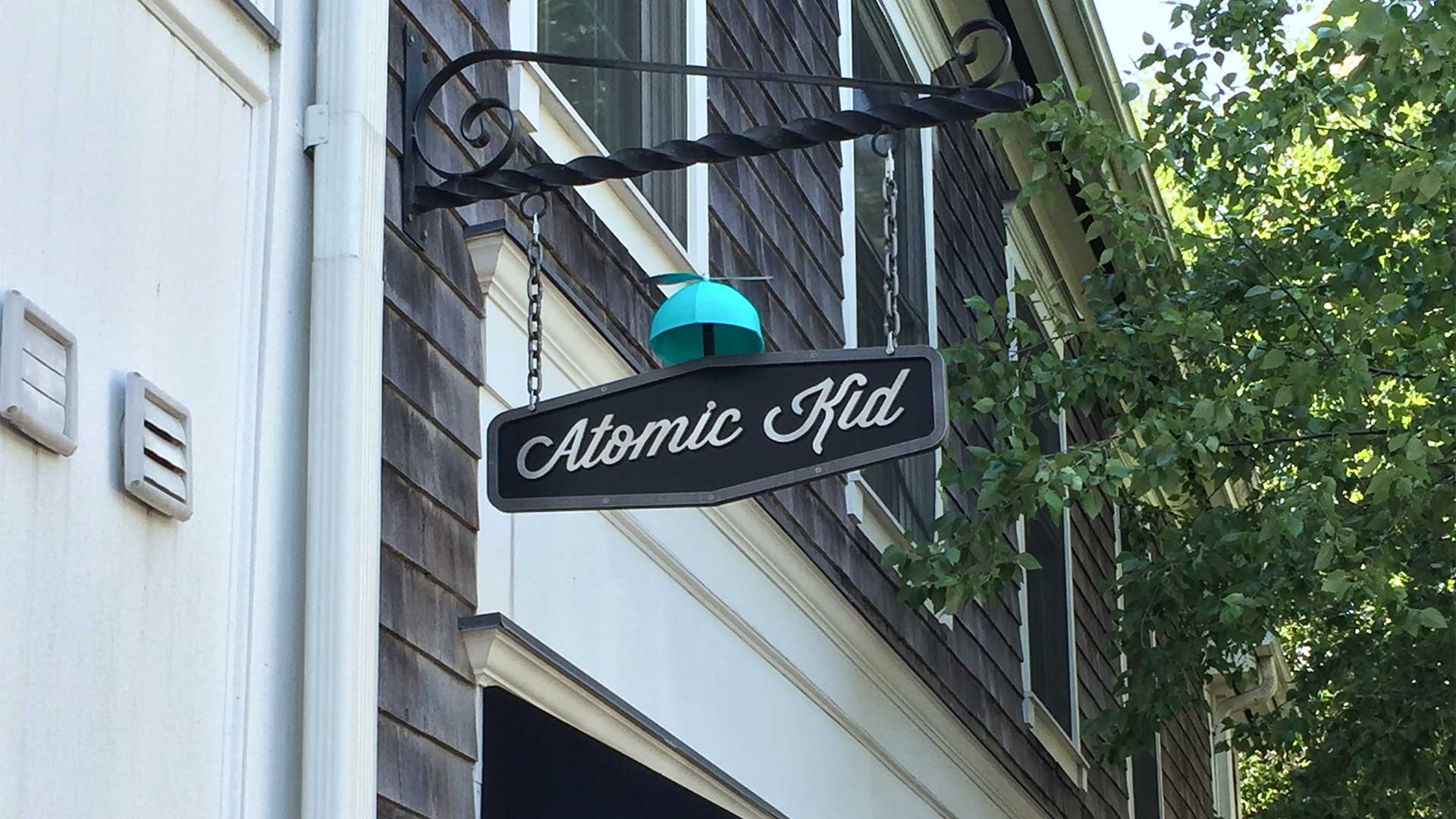 We’re pretty excited about it. If all else fails we can always fall back on “sign design”. We hope you’ll all stop by the office sometime to see it in person. Now, there are no excuses for walking by our door anymore!